Spyros Kolyvas, a painter from Greece who works exclusively with aquarelles, has all the credentials of a competent artist, both technically and aesthetically. Indeed, his paintings reveal a power in the use of color and a strong energy in the creation and the structure of the theme.

It is a fact that form, color, light and diagonals give an effect both powerful and peaceful that proves that he is an accomplished artist with a personal articulation and style of expression. By this, I mean to say that Kolyvas’s artworks are recognizable. The transparency of the color that vibrates luminosity is one of the most definitive characteristics of the artist’s work. Regardless of the warmth of the shades he uses in each different painting, the effect is similar in the measure that it reflects light. This, of course, is accentuated by the nature of the medium itself, but it is not entirely due to the aquarelle ᾽s natural transparency. This assessment is also verified by the way the colors are fused into one another.

In the majority of his works the painter shows an extraordinary capacity to blend colors of different texture and volume: Indeed, light, transparent, lucid surfaces functioning as back-ground are being cut or filled by strokes of brushes - or even entire areas, at times – of opaque color creating a game of succession between different perceptions, feelings and perspectives. And while all this is expected as far as water-color is concerned, because of the fluidity, the liquidity and the transparency of the medium, Kolyvas goes far beyond that, in the extent that he also seems to be able to work the other way round. Namely, he astonishingly creates the illusion that he follows the exact opposite route!

Moreover, the painter does an exceptional work in accentuating the lucid effect of the water-colors. The light glowing, as though from within, artificial and misty, creates an allusive atmosphere. The landscapes seem to offer a temporary glimpse under the morning haze creating to the viewer a nostalgic sense and a growing urge to discover the hidden, the suggested beauty of the places afar.

In doing so Kolyvas creates works of impressionistic vision. But it wouldn’t be fair to say that impressionism is what his painting is all about. Although his landscapes lack the volume of permanence, offer a temporary vision of nature – just like the impressionists – his aim goes beyond that. The painter wants, rather than to depict nature, “to discover and reveal the internal structures and particular characteristics, to record vibrations, to decode natural forces”. This is probably why his works are suggestive and allusive. He manages to give substance to the impermanent and at the same time to put this moving sensation to a halt without disrupting the balance of the theme!

This sense of balance is also enhanced by another virtue, other than his clear power in the use of color, light and the mastering of the -tricky- aquarelle that the artist shows in his work: the use of lines -horizontal, vertical and diagonal ones- that give the synthesis a sense of movement and depth. This element is merely essential, given the fact that Kolyvas creates landscapes. The horizontal line of the horizon gives the paintings a sense of stillness but the diagonals created by the outline of the coastline or the vertical lines of buildings or the ship’s mast create a different rhythm that enriches the whole conception and structure of the paintings.

Naturally, since the painter comes from Greece, a country surrounded with water, the liquid element is almost omnipresent. Boats floating in tranquility, coastal villages seen from a distance, the vast infinity of the sea under the blue sky, sandy beaches and misty islands are some of the themes Kolyvas is attracted by. The different shades of blue, grey and turquoise of the sea and sky opposed to the warm golden beige of the sand, the sienna and the amber of the soil as well as the strokes of white light create an impression of serene tranquility and peaceful power. The reflections on the water surface verify the painter’s skills.

As a conclusion one might say that Spyros Kolyvas, being a master of the watercolors, creates works that are remarkable because of their aesthetic and technical competence, their suggestive power and the extraordinary use of light. 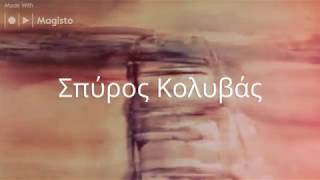